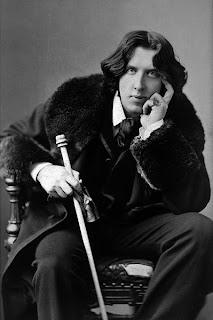 "I must say to myself that I ruined myself, and that nobody great or small can be ruined except by his own hand. I am quite ready to say so. I am trying to say so, though they may not think it at the present moment. This pitiless indictment I bring without pity against myself. Terrible as was what the world did to me, what I did to myself was far more terrible still.
I was a man who stood in symbolic relations to the art and culture of my age. I had realised this for myself at the very dawn of my manhood, and had forced my age to realise it afterwards. Few men hold such a position in their own lifetime, and have it so acknowledged. It is usually discerned, if discerned at all, by the historian, or the critic, long after both the man and his age have passed away. With me it was different. I felt it myself, and made others feel it. Byron was a symbolic figure, but his relations were to the passion of his age and its weariness of passion. Mine were to something more noble, more permanent, of more vital issue, of larger scope.
The gods had given me almost everything. But I let myself be lured into long spells of senseless and sensual ease. I amused myself with being a FLANEUR, a dandy, a man of fashion. I surrounded myself with the smaller natures and the meaner minds. I became the spendthrift of my own genius, and to waste an eternal youth gave me a curious joy. Tired of being on the heights, I deliberately went to the depths in the search for new sensation. What the paradox was to me in the sphere of thought, perversity became to me in the sphere of passion. Desire, at the end, was a malady, or a madness, or both. I grew careless of the lives of others. I took pleasure where it pleased me, and passed on. I forgot that every little action of the common day makes or unmakes character, and that therefore what one has done in the secret chamber one has some day to cry aloud on the housetop. I ceased to be lord over myself. I was no longer the captain of my soul, and did not know it. I allowed pleasure to dominate me. I ended in horrible disgrace. There is only one thing for me now, absolute humility."

"Of course the sinner must repent. But why? Simply because otherwise he would be unable to realise what he had done. The moment of repentance is the moment of initiation. More than that: it is the means by which one alters one's past. The Greeks thought that impossible. They often say in their Gnomic aphorisms, 'Even the Gods cannot alter the past.' Christ showed that the commonest sinner could do it, that it was the one thing he could do. Christ, had he been asked, would have said - I feel quite certain about it - that the moment the prodigal son fell on his knees and wept, he made his having wasted his substance with harlots, his swine-herding and hungering for the husks they ate, beautiful and holy moments in his life. It is difficult for most people to grasp the idea. I dare say one has to go to prison to understand it. If so, it may be worthwhile going to prison.
(...) Indeed, that is the charm about Christ, when all is said: he is just like a work of art. He does not really teach one anything, but by being brought into his presence one becomes something. And everybody is predestined to his presence. Once at least in his life each man walks with Christ to Emmaus."